Social media is this generations most popular way of trying to get sponsored.  I feel it is due to the accessibility one has to any brand whose instagram handle they can find.  Search some hashtags, find some brands, and send your messages…easy as pie.  Now, there is also another way to go about this.  It seems lots of kids film themselves on their accounts, slow mo some hot trick (usually involving a body varial), use some 80’s style music, and pray on going “viral”.

John Benton is one of those kids who has happened to go “viral”.  Some of his self filmed instagram edits have as many as 43,000 views.  Even more interesting is that he is getting that many views not from skating a 20 stair rail, but from holding on to a bar and sliding under it.  He is  also a flow rider for “The Friend Ship”, which he constantly promotes on this instagram.

SMDM:Okay John, where did you get the idea to make these instagram edits?John:Ummm, well, when Instagram first started letting you shoot video, i lived far from my friends.  I had a shitty truck and i couldn’t drive very far.  I would make videos to show my friends the cool spots i found.

John:Haha, nah.  I don’t think it takes practice, you just lean your phone on the nearest rock or random piece of trash, and there you go!  We’ve all seen skate videos, so we know how it goes.

SMDM:Has anyone tried to jack your phone while you were playing Ty Evans?

John:Dude, so many people have picked up my phone!  One time this dude picked it up and started walking away, like ignoring what i was saying, and i caught up to him and asked him “YO,didn’t you hear what i was saying?” and he said “Oh, i was gonna give it to the police so they can return it.” This dude had a skateboard too…what the hell…

SMDM:People are scumbags. Off topic, i heard you started skating late in the game, is that true?

John:It doesn’t make you good because you get free stuff.

John:I did the classic “Send your footy to your favorite company” thing.  My friends were getting hooked up and they peer pressured me into sending my footage out.  Tim at friendship said he couldn’t hook me up at the time, but said maybe in the future.  One year later he messaged me back, asking if i still wanted to be a part of The Friend Ship, and I said, “yeah, duh”.

SMDM:Wow, so the video and some persistence actually paid off.  Impressive.

John:I don’t think anyone would have hooked me up and supported me besides Tim.  I always loved his and Eric’s video parts and i feel like he gets my stupid skating.

John:I have had a youtube channel before I had an instagram, but i didn’t do unboxing videos or make people watch me waste my life at starbucks, or anything lame like that.  It was just dumb skate montages with my buds that i would make for myself to remember the good times!

SMDM:I guess instagram is the way to go.  More access to people and less uploading than Youtube.  So my next question is, are you flow for The Friend Ship?

SMDM:Most of the kids sending sponsor messages ask to be “Flow”.  I want to get a better grasp for those out there, of what being “Flow” actually means.

John: The Friend Ship is awesome and just lets me do my thing.  They support me.  I know I’m never going to go any further in skating, than I am now.

SMDM:You do seem to advertise the brand well, and fit their image.  Both important things involved with riding for a company, especially a smaller one.  I don’t think kids get that part either.  I think they just expect free and that’s it.

John:Im lucky to get anything free, and I’m thankful.  I tag them in pics because they ask me to when possible, and why wouldn’t I want to give back after all the support they give me? I feel like a little kid living out my dream!

SMDM:I think you do the right thing from a brand’s standpoint.  That’s what they want, promotion. Have you had any offers you turned down?

John:Nah, i never really sent out mass sponsor me tapes like that.  I think thats goofy…

SMDM:Speaking of goofy….  The “90’s rave/cosplay” look seems to be back and in full effect.  What inspires your gear? Do you think your outfits helped you get hooked up?

John:I don’t think i dress like a 90’s raver, haha, but I like dickies and jeans and cool looking shirts.  I don’t know if it helped anything.

SMDM:Are you sure you you didn’t get some sort of inspiration from the old A-1 meats video?

John:People have been telling me that lately.

SMDM:So nobody else has offered you anything? you have 12k followers. Surely someone has seen that as a good platform to promote their bong stickers or shoelace brand….

John:Nope, nobody has offered.  I’m fine with that, this is all for the love, baby!  Luckily I’m on the bus going to work, and i have time to look at my phone right now….

SMDM:So you work! You don’t get paid to skate? I’m sure these kids think flow is like a retirement plan…..

John:LOL! NO!  I have 2 part time jobs and I can only skate on Friday and Saturday.  Those are my only days off.

SMDM:So, for the record, “Flow” isn’t all fun and games?

John:Shit, if i got $5 from skating i would be hyped!

John:To get paid for something you love, I would take anything!

SMDM:So, when you go to a park, do the local park kids look at you funny because you have pink grip and do body varials, while they switch crooked grind the 20 step park rail?

SMDM:I mean, these kids risk life and limb all day at the park chucking themselves down a triple set,and won’t ever get a free sticker.  You duck under a bar and do a no comply and you get free product.  Do you ever encounter any jealousy?

John:I don’t skate park much.  If i do it’s usually just with some friends.  Im the jealous one. I wish I could double 360 flip down a triple set!  Ollies down stuff are fun but anything more takes me too long and isn’t fun.

SMDM:Do you know this dude? 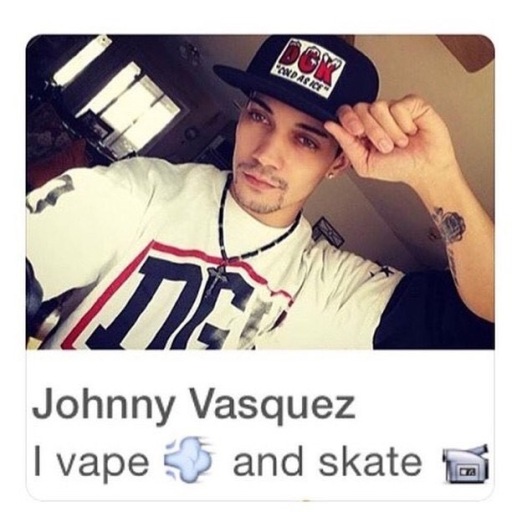 John:LOL, no.  He seem’s like a good dude except he vapes and skates.

SMDM:Ok, so its a given with your sponsor that you don’t get asked to throw yourself down stuff.  Have they mentioned to you an increase in sponsor me vids coming in since you portray a less dangerous form of skating?  Kids probably think they can do the same things you do, except will film it in a parking lot with no shirt on….

John:Nah, not that i know of.

SMDM:Im just asking because kids think seeing skating that isn’t stairs as easier to do and think they can get sponsored for it.  They don’t get the aesthetic of what goes along with it, they just think a wallie at a park and a no comply will get them sponsored.

John:I think they are cool with me skating however i want. If i want to kick flip a ten they would be okay with that, just as well as they would be with me kick flipping on a basketball.

SMDM:You know I’m gonna have to ask you do kickflip on a basketball now, right?

SMDM:I hope you do, I’m gonna call you out if you don’t.  Doesn’t your brother skate?

John:MY little brother grinds 20 stair rails, and he has never sent a sponsor me tape out. He lives in Tennessee.

SMDM:Maybe Coleman can get him a kombucha sponsor.

John:Kombucha is nasty, i wouldn’t take that stuff for free even if they wanted to give it to me.

SMDM:It’s a probiotic.  Usually, if its not easy to take, its not good for you, my life lesson to you. Kombucha is the essence of life, candy gives you diabetes. Another life lesson.

John:New year, new me. No more candy and soda.

SMDM:Good choice.  Moderation is the key.  Off topic, but do you have health insurance?

John:Nah, no health care.  I work two part time jobs.  I moved to Seattle to get full time at one of them and hopefully I get it soon, then i can get someone to squeeze my balls for cheap.

SMDM:So your into prositiution? Im guessing flow doesn’t help with the ladies?

John:Haha, no prostitution isn’t cool, and i have a girlfriend.

SMDM:Bummer, this almost got interesting.  Does your girlfriend tell you to grow up and stop skating, or is she supportive?

John:She tells me to grow up sometimes, an sometimes she is cool.  Depends on the day.Fuck, I’m only flow, ya know?

SMDM:How did you get so many followers? Farming? Unfollowing/following? I know people who do that.  It’s wack.

John:Dude, I have no clue. It just started happening.There are so many people better than me that I would rather watch. Like Todd Falcon.

SMDM:Does your battery die faster since you have all those like coming in?

John:Frick yeah it does! I just turned off the notifications, so now it should last a little longer.

SMDM:OK, last one.  So how does it feel riding for a small brand, and i mean a real small brand, not like Numbers….?

John:I think it’s cool to support cool small brands. Now, I don’t know anything about numbers, and if its ran out of a garage but….

SMDM:Koston’s garage, not a normal garage.  It probably has climate control and a butler….

John:If it’s Koston’s garage, its probably bigger than my apartment or it’s a garage they got just for that. Bieble’s park is technically a garage i guess, because it has doors….And I’m sure Nike is backing it, they are in it for the “numbers”.

SMDM:Oh, so its a play on words. I get it.  I was telling my buddy Vegan John that the only number kids care about is 420, and they should make 420 socks.

John:Maybe, who the fuck knows.

John: That’s not my name.

SMDM:It’s a joke.  Karl Watson called my friend Tim “Tom” for a whole day once.

John:Thats tight. Karl rules.Oh, I have a berrics video coming out.

SMDM:Damn, the Berrics.  How did that come up?

John:Tim, who owns Friend Ship, works at the Berrics.so that’s the hook up.

SMDM:So you have starred on the Berrics. That explains the follower count…

Check out THE FRIEND SHIP SKATEBOARDS, John’s #1 supporter! Also follow join on instagram @fustoop. Maybe at 25k he can be a full on AM!