Skating has primarily been a male dominated activity.  When I started skating, I can only  remember a handful of female skaters, and they never really seemed to be able to do much more than barely push or maybe do an Ollie standing still half an inch high.

As skating becomes more mainstream, with the X-games and other large competitions featuring separate womens divisions, it is becoming more common to see females participating in skateboarding.  There are even a handful of female only brands out now as well, which wouldn’t have been able to survive years ago.

On top of all the commercial skating, there are also some females who skate street and just do it for personal enjoyment. One of our favorites is Emily, aka @lilnicegirl.  Some of you may know her from the Dime Glory Challenge, where she gets tossed out of a sumo style, last man standing type of contest.

We caught up with Emily while she was driving home from a family gathering in Michigan….

SMDM: So, how did you get started with skating? It’s not something that is really marketed towards females….

@lilnicegirl:I grew up snowboarding, so I had a lot of friends that also skateboarded.  I always thought skateboarding seemed really fun, so I asked some of my friends to teach me how to skate.

SMDM:I’m assuming your from Michigan? Were you the only girl skating there?

@lilnicegirl: No, im not from Michigan, i was just visiting my Grandmother.  I’m from upstate New York.  No girls skated there. I started skating a few years ago when I lived in Salt Lake City.  A bunch of girls skated there, so that helped me get into it.

SMDM:Do the guys ever vibe you while you’re out skating?

SMDM:I can only imagine. Have you had any bad hazing experiences?

SMDM: I used to get thrown into pricker bushes in highschool for skating, but that was in 1993.  You have it easier now.  Skating is accepted.

@lilnicegirl:It’s way more accepted now. Everyone wants to be a skater!

SMDM: Do you only buy “Meow” skateboards?

@lilnicegirl:No, but should I?  Is that your favorite brand?

SMDM:It’s the only “all female” brand i know of…anyway, what started all the Instagram selfie videos?

@lilnicegirl:I joined instagram around the time the video feature came out.  I also got into skating at that time, and got my first Iphone.  That was an exciting time for me!  My friend filmed a few things of me one day and I was home playing with my new phone and decided to make a little edit with a girly pop song that fit my style.  I had fun making it and decided to make more.

@lilnicegirl:  I remember I would always send them to my dad when I was finished with them.  My skating wasn’t so good, but I was more proud to show him the funny, entertaining video I created!

SMDM:What does your father think about this?  I’m the father of 2 girls myself.  I know I wouldn’t be super excited if  my daughters were wearing hooters shorts around a bunch of dirty skateboarders….

@lilnicegirl:Hooters shorts! You mean my little pink ones? Those are a new thing.  I guess your right.  I don’t think I was wearing those in the videos I sent him.

SMDM:Thank god.  You don’t want to give the poor guy a heart attack.  Speaking of the shorts, how did Antuan Dixon end up wearing them?

@lilnicegirl:They were on a pile of clothes I had laying around, and he wanted to see how he looked in them!  Who do you think looked better?

SMDM:Definately Antuan.  I have a thing for tattoos so I’m biased….So how did the Dime Glory Challenge invite come up?  They always seem to have a random assortment of characters at their events.

@lilnicegirl:Haha! I don’t know, they are all about having FUN and I guess they saw that I liked to have FUN and figured we would all get along well and have a fun time, and we did!

SMDM:Did they pay for your ticket to get out there?

SMDM:Amazing.  So for the kids out there, Instagram pays off.  Has anyone offered you any sponsorships off of Instagram?

SMDM:Oh, the 90’s cosplay guy? So you have a sponsor who gives you someone elses old used clothes?  I think with the number of followers you have, you could at least get an unused shirt from someone.

@lilnicegirl: I guess Instagram has allowed me to meet new friends, and some people who have been kind enough to give me a few things here and there.  I have got some unused tees, but mostly from non skate brands.

SMDM:The first time I saw a video of you was when you attempted to hippie jump and slammed.  Would you say that video going viral set you off to your life of Instagram fame?

@lilnicegirl:Yeah, that was a couple of summers ago.  I got a lot of weird followers from that because it was on “Hall of Meat”.  I deleted my Instagram account after that.  I made a new one a little over a year ago, and I get less messages from teenage boys now….

SMDM:Oh god, kids are the worst.  We also get lots of messages from teenage boys, but they just ask us for free stuff, and then wonder why they arent getting anything free…

@lilnicegirl: So, you kind of know how a girl feels, when a boy tells a girl that she rocks, and then asks for “stuff”, and when you tell them they arent getting any, they get mad.  It’s the same thing.

SMDM:Great analogy. I think… So, with all due respect, do you think its easier for girls to acquire sponsorships in this day and age with social media?  You skate for fun it seems, but some girls probably get into it for different reasons.

@lilnicegirl:Yeah, that’s definately whats happening.  It’s way easier to get sponsorships now because of the internet, but whatever.  As long as they are enjoying what they’re  doing.  I feel like watching skating on Instagram is getting way less interesting because everyone is starting to look the same and post the same style videos.  The good ones still still stand out though…. 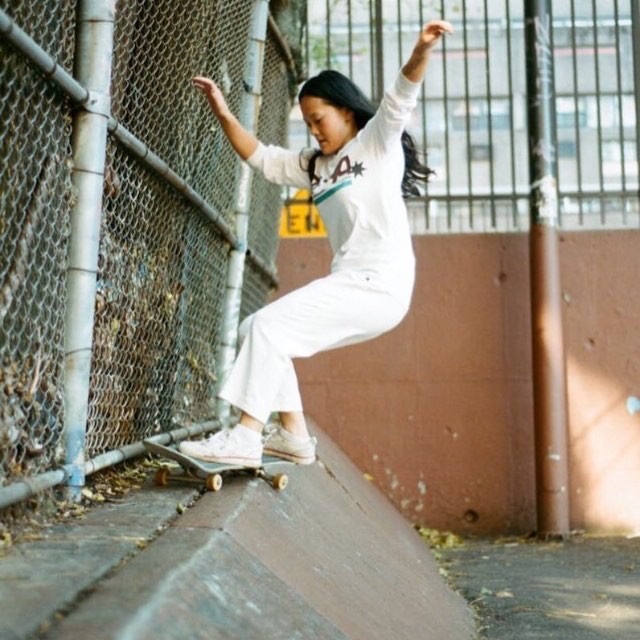 SMDM:It seems everyone follows a similar formula.  Wacky gear, 80’s music  or awful rap music, and lots of body varials.   So while your out at the park making these edits, do you ever notice some of the guys trying to show off and backflip the pyramind in hopes that you would fall in love with them?

@lilnicegirl:No, I usually try to go to the park alone.  I’m very shy if I don’t know you! If it’s busy I just try and skate around fast, so I wouldn’t even notice if I was being hit on….

SMDM:That makes sense, although i wouldn’t guess you were shy from some of your Instagram posts.  So, for the record, you don’t skate for a career, but Instagram has helped get you a few trips?

@lilnicegirl:Yes, correct!  It’s just a lot of fun for me! Lately I’m lucky to get to skate once a week but hopefully I can skate soon!

SMDM:I feel that. The mundane tasks of everyday life always get in the way of the best thing there is.  So you work part time and go to highschool? It must be hard to juggle both.

@lilnicegirl: I wish I was still in high school.  I was going to college.  I’m a college dropout but will return soon, hopefully this fall.

SMDM:Oh, I thought you were 18 tops.  Do y ou get sent lots of DM’s with dudes telling you they are in love, and why you should date them? Similar to how a skateboard brand may bet a sponsor me DM?

@lilnicegirl:No.  I used to, but none lately.  Maybe I’m ugly now….

SMDM:You’re a celebrity, and Antuan wore your hot pants.  Guys are probably just scared he will beat them up. Speaking of which, how did you end up with him that one fateful night?

@lilnicegirl:I met up with my friend from LA at a party and he was with a bunch of California people.  We all just ended up there to drink.  We stayed up all night talking, and I learned a lot about him.

SMDM:Any good stories about boys professing their love for you?

@lilnicegirl:No, but one time a boy sent me a DM dick pic!  That was the closest anyone has come to professing their love to me.

SMDM: It wasn’t me, I swear…So do you prefer to date skaters or normal dudes? Brian Anderson said he was never attracted to skaters in his recent “coming out” interview.

@lilnicegirl:I don’t “prefer” to date skaters.  I have dated two skaters in the past and it didn’t work out too well.  I don’t really date much so I’m not sure what my type is.

SMDM:Gotcha.  What do normal dudes think when they find out you skate?

@lilnicegirl:I don’t know, i’ve never really been in that situation.  I’ve only been skating for a few years and I haven’t really dated that much.  If it did come up, they would probably be excited and tell me they longboard! Ha, I like how you called a non skater “normal”.

SMDM:Would you ever date a scooter kid?

@lilnicegirl: I’m too old to date a scooter kid. How young do you think I am?

SMDM:It wasn’t a question directed towards pedophelia. Let’s call it a “scooter MAN”.

@lilnicegirl:Good.  Well, if my soulmate was a scooter man, which I hope he wouldn’t be, I would accept it.

SMDM:Cool. It’s good to not be judgmental.  I guess that’s why they call you “lil nice girl”.

@lilnicegirl: I don’t know, I think I just thought it cute.  And I AM nice! although people have messaged me before, specifically to let me know i am NOT nice. 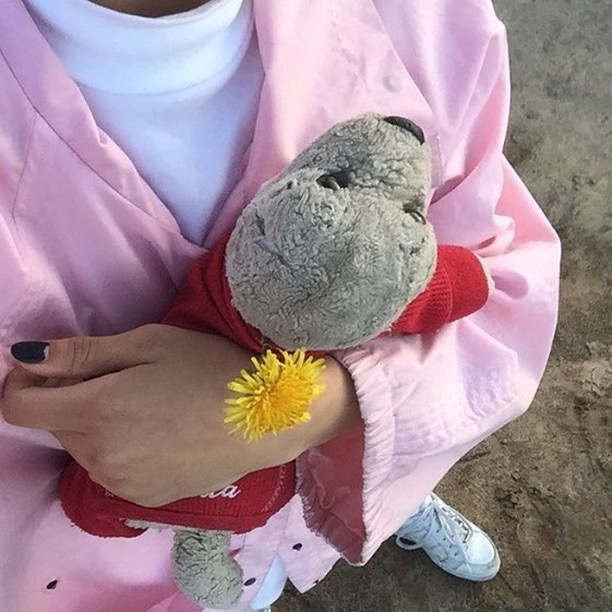 Check out Emily’s sponsor @vintagesponsor, for all of your 90’s cosplay needs.

3 thoughts on “Skateboarding as a Female through Instagram. The @lilnicegirl Interview”