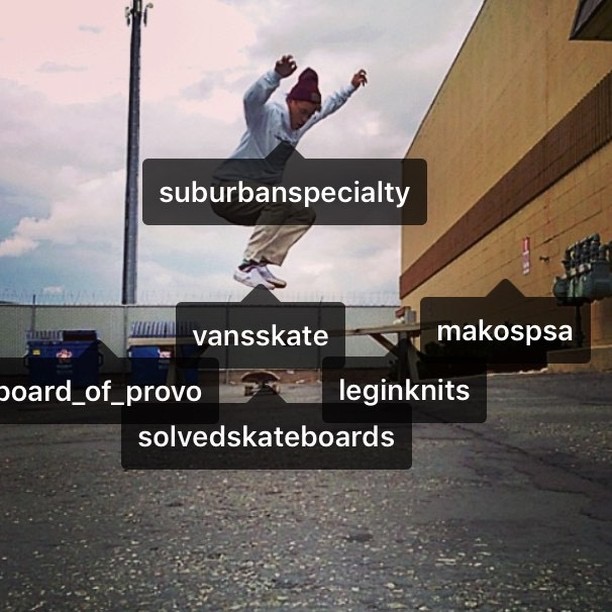 To some, skateboarding has been a form of expression  for years.  It can best be used as a creative outlet, which can be reflected in tricks, clothing style, and even how you put grip tape on your board.  No matter what level you’re at skill wise, there’s always a way to find enjoyment and creativity in skateboarding. This is what I believe drew me into it back in 1989.

Let’s fast forward to present day.  With internet accessibility, the general acceptance of skateboarding, and the ease in which one can have items manufactured, starting a “brand” seems to be the new way for people to express their creativity.  Not understanding how much these smaller “movements” can actually hurt skateboarding as a business, they seem to be an epidemic that pops up all over.

Introducing Noah McKizzie.  A 20 year old skateboarder, and starter of his own “movement,” Aurora skateboards.  Noah has a different approach than most.  He started his own brand, but still sends out emails to other brands for sponsorship and critique.

SMDM:Ok, lets start off with the basics.  Whats your name and what do you do?

@nvrmndsk8: My name is Noah Mckizzie. I’m 20 years old, and what I do  is skateboard, film, and create. I am the founder of Aurora Skateboards.

@nvrmndsk8: Aurora skateboards is a movement I’ve created to express my art style and whatever inspires me to create the graphics.  I started back in 2015 in my home state of Colorado.

SMDM:Did you send yourself a “Sponsor Me”?

@nvrmndsk8: Haha, no.  Since it’s not very big, I try to promote it as much as I can.  I have three good friends that back the movement and ride for Aurora. I’m more of a TM when it  comes to the Aurora stuff.

SMDM:That’s good. You can’t get kicked off that way.  I heard a rumor that Henry Sanchez was made TM of Lucky Skateboards, so he couldn’t get kicked off. Not sure if that’s true though.  So, is sending out your footage to other brands part of your duty as TM?

@nvrmndsk8:Honestly, Aurora is something in my skateboarding life that I want to keep fun based. If it goes big that would be cool, but for right now, it’s just all fun and keeping the passion in skateboarding alive.  You will never catch me turning myself pro from something I’ve created. Nobody likes an Andy Schrock! HAHAHA *(editors note: Andy Schrock is not pro for his own brand, but is still a kook)

SMDM: How many of these “Sponsor Emails” have you sent? 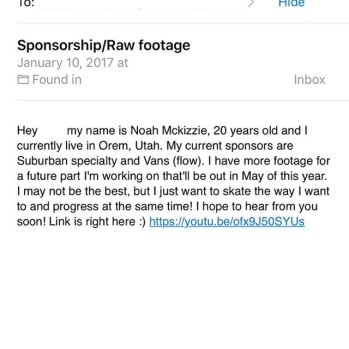 @nvrmndsk8: I’ve sent a few. I’ve got some good feedback from brands like Santa Cruz and Acid Chemical.  I don’t send footage to get free shit, At this point in my life I could care less. I just want to see how much my skateboarding has progressed.

SMDM: You title them “SPONSORSHIP”. Thats very misleading.  I guess it’s good though, sell your brands stuff and ride free stuff from someone else. Very cost effective.

@nvrmndsk8: I have a good example for you.  Look at Kelly Hart.  He is pro for Expedition One and Es.  At the same time he’s also a TM for both brands.  Nowadays he’s more busy with the managing stuff, but at the end of the day he’s a skateboarder like you and I, trying to progress and stack these clips! The hustle never stops.

SMDM: Um, yeah, but he doesn’t send “Sponsor Me” videos to other brands….

@nvrmndsk8: No, but the difference between myself and Kelly is he doesn’t have to send footage, because he already established himself years ago, before I even started skating.  Maybe there is a part of me that still has hopes for my skate career, but who knows.

SMDM: So, just to be clear, you own/run a brand, and try and get free stuff from other brands.  So, why have a brand in the first place?

@nvrmndsk8: I guess it’s wrong to have dreams like that at my age.

SMDM: I just don’t get it.  Maybe I’m old.  You run a brand, yet your Instagram looks like a Habitat advertisement.  Earlier you stated that you send to brands you support.  I sure as hell didn’t see any Santa Cruz decks on your page…… 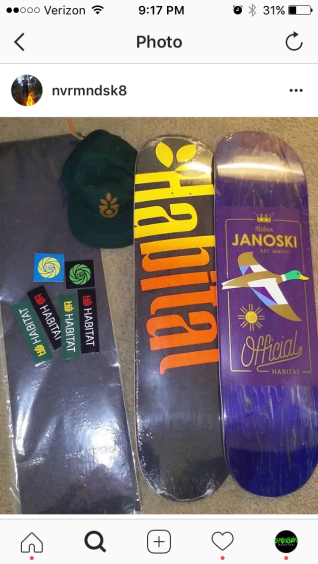 @nvrmndsk8: I never said Aurora was a brand!

SMDM: You did in the first question, but continue….

@nvrmndsk8: Aurora is a “Movement”.  We don’t make profit from people buying our boards. That money goes right back into making more boards.  Like I said, Aurora is all for the love of skateboarding, especially representing Colorado skateboarding! Back to your question about sending footage to brands like Santa Cruz.  When I was a kid, I had a Santa Cruz board and loved their image.  So I thought I would send some footage and get some feedback.

SMDM: How did that go?

@nvrmndsk8: The TM hit me up a couple of days after I sent it.  He told me he loved my skating, but it didn’t fit the standards of the Santa Cruz team, which I can see and respect.   He also told me to keep the passion alive, so that was very motivating.

SMDM: Do you think the smaller brands you send your footage to make profit? I don’t think you know how rough it is out there.

@nvrmndsk8:I do know their struggles.  I understand why they can’t add more riders to their roster or even flow.  I send my footage in to these brands to get feedback.

SMDM: So, why title the email “SPONSORSHIP”, and not mention anything about feedback? 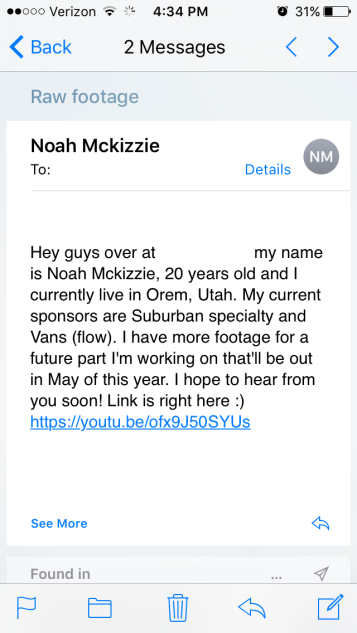 @nvrmndsk8: That’s how it’s always worked for me since I’ve started filming and sending footage in. “Sponsor Me” tapes are raw clips you send to a brand you like and see what they have to say.

SMDM: I see.  Back to Aurora.  Do you sell your boards to shops or online?

@nvrmndsk8: With selling boards, I handle orders through my Twitter and Instagram accounts.  If a customer wants a board, they shoot me a DM. So, technically I sell them online through social media.

SMDM: So not only are you stealing sales from some decent brands, you are also taking shops business as well.  You are definitely helping the skate community with your “Movement”.  I feel like I am learning a lot.  I’m older, so this whole new generation of Social Media is new to me.

@nvrmndsk8: First and foremost, I would NEVER do that!  Shops are doing fine without me. I haven’t sold enough boards to effect any shops.  My “Movement” is definitely not big enough.  This year I actually have plans of going back home to Colorado to see if they want to carry Aurora boards at the shop there to get some sales.  For years, I have wanted to help the Colorado skate scene grow, for the shops as well!  I feel like this is the year for Colorado skateboarding!  Again, I never want to hurt the shops. That’s the last thing I want to do.

SMDM: Very noble. So, let’s talk about your other sponsors that you list in these emails.  You list “Vans flow,” and whats the other one?

@nvrmndsk8: Suburban Specialty.  It’s an embroidery clothing brand based in Syracuse, New York, supporting a bunch of amazing talent from photography to skateboarding. 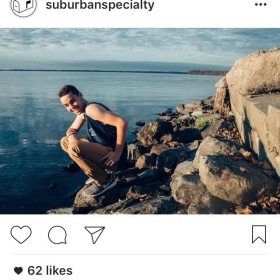 SMDM: Very dope. So core.  Skateboarding and rock climbing are both so dangerous.  So, on to Vans.  Do you deal with a TM? They are pretty big. Do they pay you?

@nvrmndsk8: No, they just gave me free shoes.  Nothing too crazy.  They stopped sending me shoes last month, so they can flow a new bunch of people.  It was fun while it lasted.  My first skate shoe were all black Geoff Rowley shoes, and they didn’t stand a chance! It was a blessing for sure. 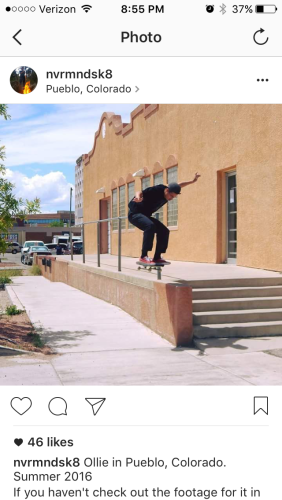 SMDM: So, if they booted you a month ago, why are you still putting them as a sponsor in your emails?  Did you forget to fix your “Cut and Paste”?

@nvrmndsk8: Probably, yes haha.  Definitely need to fix that.  Now, I have a quick question for you!  What was it like sending footage to companies? I want to go about the proper way in the future.

SMDM: In my day it was VHS tapes and it cost money.  So you didn’t send one unless you actually had a clue, or something to offer.  Or you wasted $10. I am also confused.  You are looking for a critique? Or a sponsor?

@nvrmndsk8: A little of both, but definitely more on the critique side.  Sorry if my views are abnormal.

SMDM: Unfortunately they aren’t abnormal at all these days. Would you like a critique?

@nvrmndsk8: Just looking for advice from someone who has been in the game for a bit.  At the end of the day I skate the way I skate.  Ray Barbee told me when I was 14, that no matter what happens, just keep skating the way you want and have fun doing it.  I live by that everyday that I am on my board.

SMDM: I think you misinterpreted his message.  I think he meant, skate, and have fun. Not to send your footage out to 100 brands like a cheap whore?

@nvrmndsk8: If you think about it, everyone can skate, but how are people going to notice your talent if you don’t ever branch out?

SMDM: Why do you feel the need for approval? Surely you can watch a video and see how you stack up against sponsored skaters.

@nvrmndsk8:  Every pro I know has done what I’ve been doing for years until they found homes with companies.  From this interview, it gives me more fire to prove to people on and off the board to follow what their hearts tell them, regardless of what anyone says.

SMDM:Yeah, but those pros were probably talented in those tapes.  You sent rocket kick flips and tricks down a 2 stair.  Look at this picture of you and a pro. No offense, but you can see the difference, right?  (I sent the picture below which features a Vans pro, and Noah,an ex Vans flow rider, side by side) 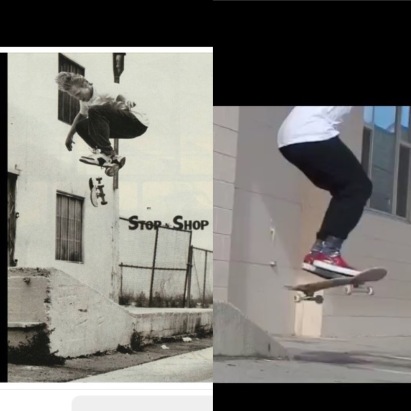 SMDM: I think kids-well, you’re 20 and should know better, but most of these kids see a video and pick out a wallie or no comply that is done in a video, not even understanding that there’s a style that these tricks are done with that make them look cool, and feel they can get sponsored. They don’t realize that there were much harder tricks that were also done in the footage.

@nvrmndsk8: Thanks for the interview. I appreciate the learning experience from it.

Check out @aurora_skateboards (movement?) and send Noah a DM.

One thought on “The Man Behind A Movement. An Interview With Noah McKizzie.”